We Live In a Hyper World

Ah … the times, they do change. Ever since computers and the internet came into being, the world seems to be operating at warp speed. We watch TV commercials showing pickup trucks bouncing over rough terrain, splashing through mud puddles at fifty or sixty miles per hour. We see fine luxury cars racing across the salt flats at top speed, only to watch them end their race with a spinning skid stop (who in his right mind would treat a nice care like that). Hardly do we see a movie produced within the last fifteen years that isn’t rife with high-speed action including car chases, rollovers, and cars and people blown off the planet in some fiery explosion. Geeesh!

In the old days, we were perfectly content to spend a leisurely three days on the train to cross the continent. Now we put ourselves through all kinds of humiliation and stress to fly the same distance in three hours. We used to cross the ocean (with a modicum of luxury) on a great ocean liner in eight days. Now we put ourselves through all manner of emotional and physical stress to cover the same distance in eight hours.

This is supposed to be a writer’s blog, so what does all this have to do with writing? Well, I’ll tell you. This same hyper-intensity is showing up of late in the writing, publishing, and editing fields. We meet with an agent or editor and we’re told we have ten seconds to get their attention. They tell us to describe our book in twenty words or less. I had an agent tell me that once, and I was so incensed, I told him since he made such a ludicrous request, I would give him a ludicrous answer. I said to him, “It’s a damn good story.” I then told him I thought he probably didn’t have the time to represent me, anyway, and I ended the conversation.

It’s interesting to note how the accepted writing styles have changed over the last forty or fifty years or so. In the old days, the "ly" words (adverbs) and the "ing" words were used quite extensively, as were adjectives, passive verbs and passive language. I recently tuned into a marketing teleseminar where an editor was discussing all the no-nos that bug editors today. Those I just mentioned are at the top of their list. As a result we have hyper writing and hyper editing with short, choppy, direct, no-nonsense “get directly to the point” sentences. Very few, if any, eloquently flowing compound complex sentences with a few adverbs and adjectives thrown in are acceptable, and only a minimal number, if any, with passive language are acceptable.

I recently picked up a couple of Nancy Drew stories from my daughter’s library the other day and began to peruse them. They were handed down from her mother, so some of them had copyrights back to 1936. Following are a few excerpts to remind us of what was acceptable writing in those days. If Carolyn King, or her ghost writers, were to write in her original style today, it’s questionable whether she would be published. Here are a few examples of her writing which I suspect is indicative of the style of most writers of that era:

--Nancy Drew began pulling off her garden glove.
--What was that? Nancy questioned eagerly, racing noisily on tiptoe out of the room.
--Nancy laughed softly.
--Nancy’s heart suddenly gave a leap.

King’s books are rife with such adverbs and passive language phrases. Such extensive usage of the “ly” words and passive phrases today would cause editors acute baldness, and if they happen to be tee-totalers, well … who knows?

Yes, the times have changed. Not that I agree, but like it or not, I guess we have to change with them, but I kinda like the Nancy Drew stories and the adverbs and passive language. They’re fun reading. 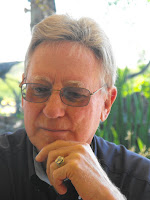 Bill lives in Tucson, Arizona. He is a two-time Associated Press award-winning columnist and writes fiction under the name Will Edwinson. His national award-winning book, Buddy…His Trials and Treasures, is available at Amazon, Barnes and Noble, or by asking for it at your favorite bookstore. Check his web site and blog at www.willedwinson.com. Bill also writes free-lance for IDAHO magazine.
Posted by Blue Sage Writers at 9:41 AM