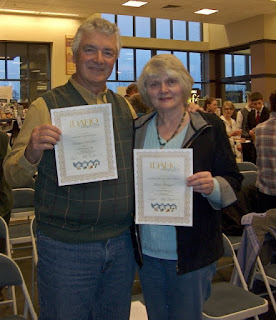 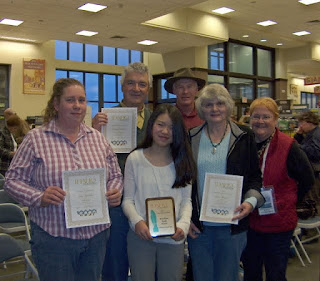 Last night several members of Blue Sage Writers attended Idaho Magazine's awards ceremony for their annual fiction contest, held at the Barnes and Noble store in Idaho Falls. The magazine is based out of Boise, but a number of the winners were from the eastern part of the state, so Kitty Fleischman, the magazine publisher, brought the awards to them. The winners also read their stories to a large group, which was a real treat for everyone.

Two of our Blue Sage members, Richard Rice and Karen Finnigan, entered the contest and both walked away with an award. Richard took second place in the adult fiction contest for his story, "The Seventh Dog." Karen received an Honorable Mention in the adult category for her story, "Letters From Jazz."

Congratulations to both of you! And thanks to Kitty for giving writers this opportunity to present their work. Kitty plans to have the stories published on the Idaho Magazine website.

--Linda Sandifer
Posted by Blue Sage Writers at 7:55 AM